1 Since January 1, 2018, the Group has applied IFRS 15 "Revenue from Contracts with Customers". All changes and comments indicated in this press release are in comparison with the 2017 figures restated for the implementation of this standard. Detailed reconciliations can be found in the 2018 Registration Document.

The 2018 financial statements were approved by the Board of Directors on April 1, 2019. Audit procedures were performed by the statutory auditors, and the audit report is currently being issued.

In 2018, consolidated revenue was €102.1 million, compared to €113.5 million in 2017, down 10.1% for the financial year. Full-year order intake was up 45.3% to €128.0 million, reflecting the excellent commercial activity in the Robotics and Aerospace divisions, where several major commercial successes were recorded in the fourth quarter of 2018.

Despite a decrease in revenue, the Group achieved its target of improving profitability. The EBITDA margin improved significantly to 14.2% in 2018 compared to 12.5% in 2017 and even reached 17.8% during the second half-year, reflecting the impact of the measures to improve operational efficiency implemented since the end of the 2017. EBITDA increased by 2.0% to €14.5 million, compared to €14.2 million in 2017.

Profit from continuing operations amounted to €7.1 million, compared to €4.1 million in 2017, up 71.5%. Non-current operating income items amounted to €0.1 million, and notably included restructuring costs for -€0.9 million, the impact of the disposal of EN Moteurs for +€1.2 million and the amortization of intangible assets recognized at fair value in connection with acquisitions for -€0.4 million.

Financial income and expense contributed positively to income for +€0.7 million compared to -€0.5 million in 2017.

Revenue for the Robotics division was €59.2 million for 2018, down 8.1% from 2017. The division was impacted during the first nine months of the year by the insufficient order intake level in 2017. This trend was reversed during the fourth quarter of 2018.

As part of the measures to improve its operational efficiency and the review of its strategic assets, the Group simplified its legal organization with the merger of several entities during Q4 and the disposal in December of the motor and special electric generator production business (EN Moteurs). This latter activity contributed €2.3 million to 2018 revenue.

Order intake for the financial year amounted to €91.0 million boosted by an especially active fourth quarter. This surge of 72.3% compared to 2017 reflects the increasing importance of the use of drones in the defense sector for land, air, naval and submarine applications.

The division's EBITDA saw a significant 7.3% increase to €11.4 million in 2018, with an EBITDA margin of 19.3% compared to 16.5% in 2017, benefiting from efficiency gains thanks to the reorganizations within the division and resource allocation discipline, offsetting the significant costs (around €1 million) for the response to the Belgian-Dutch call for tenders.

In the Aerospace division, revenue fell by 11.5% to €32.6 million in 2018, due largely to a slowdown in assembly line operations. Order intake for the financial year amounted to €32.8 million, a 2.4% increase, and given strong order intake of nearly €8.6 million in January, it is expected to contribute to the recovery of the division's growth during the 2019 financial year.

Finally, Simulation remains at a high level of revenue, at €10.0 million in 2018, boosted by the finalization of the second contract for driving simulators for military vehicles during the financial year. Order intake was up 27.0% to €3.9 million.

Cash flow stood at €10.2 million compared to €10.9 million in 2017. The working capital requirement, which decreased during the first half year, is up by €4.1 million over the financial year, due to the level of activity at the end of the year, especially in December.

The Board of Directors will ask at the Annual General Meeting of 6 June 2019 for the approval of a dividend payment of €0.40 per share, paid in cash, in respect of 2018. If this dividend proposal is approved, the ex-dividend date will be 2 July 2019, and payment will be on 4 July 2019.

Award of an emblematic contract in Robotics

Following a call for tenders launched in the Summer of 2018, the Belgian navy has awarded the Belgium Naval & Robotics consortium, bringing together Naval Group and ECA Group, the supply of 12 mine-hunting vessels equipped with a total of 100 drones. Six ships are for the Belgian navy, the other six will be delivered to the Dutch navy.

ECA Group's share of this contract represents around €450 million. The 10-year program will start with a design phase of about 3 years before the production and delivery phase of the drone systems. The contract should generate revenue starting in 2019.

This success is the achievement of a strategy focused for many years on the development of drone systems composed of multiple and varied drones cooperating as autonomously as possible within the same mission (see the press release of March 18, 2019).

The final notification of the contract could take place by the end of April, after processing of potential recourses.

Full-year 2018 stood out for its remarkably high order intake. Continuing this trend, 2019 will feature significant growth in operations, particularly in the Aerospace and Robotics divisions.

In this favorable commercial context, the Group's profitability should continue to improve, amplified in the medium term by the volume and series effects of the mine-hunter contracts. Several major navies including France, India or England will renew their mine hunting fleet in the coming years. In addition, ECA Group believes that most navies will also be equipped with transportable drone systems that can be used from the coast.

ECA Group's profitability should continue to benefit from cost reduction and operational efficiency efforts. The mergers of legal entities, particularly the mergers in 2018 within the Robotics division between ECA Robotics, ECA EN, ECA RSM, ECA DRONES, then at the start of 2019 within the Aerospace division between ECA Aerospace, ELTA and ECA Sinters, are part of this momentum.

In 2019, the Group is targeting revenue growth above 5%. This outlook does not factor in the approximately €450 million contract for the supply of 12 mine-hunting vessels for the Belgian and Dutch navies.

The disclosure of the results for the 2018 financial year includes this press release, as well as the presentation available on ECA Group's website: www.ecagroup.com section Investors.

Next release: Publication of first quarter 2019 revenue on April 25, 2019, after close of the stock market.

3 The segment information is adjusted for the contribution of activities whose closure or disposal was decided in 2017 (deconsolidation of ECA SINDEL from the Robotics division at January 1, 2018 and disposal of SSI's business in August 2018 in the Simulation division). 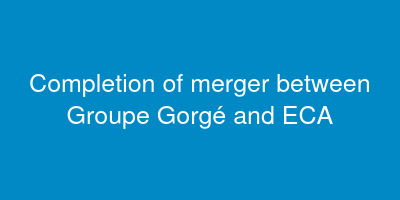 ECA Group has been awarded a contract worth more than 20 million euros for the modernization of...